On the iconic country-revival album “Will the Circle Be Unbroken” (1972), by the Nitty Gritty Dirt Band and a legion of friends, perhaps the most resonant song on an album full of resonant songs is the penultimate track, a live-in-the-studio all-star jam on the title song that features (among others) Maybelle Carter and Roy Acuff on lead vocals, Vassar Clements on fiddle, Earl Scruggs on banjo and Merle Travis and Doc Watson on guitar, plus everyone and their nephew singing the chorus.  The passion and commitment to the music that suffuses the entire album peaks with this unforgettable performance.

It must have been particularly resonant for Carter, a founding member of the Carter Family and a veteran of the Bristol Sessions, 45 years before.  She had been only 18 at Bristol, and pregnant with her first child (future country star Helen Carter).  So much had come out of those early days, and she’d lived to see it all.  What thoughts must have run through her head!

Back in 1935 Carter and her partners, brother-in-law A.P. Carter and cousin Sara Carter, had recorded a song adapted by A.P. from a 1907 hymn by Ada R. Habershon and Charles H. Gabriel.  It wasn’t their biggest hit, but it had proven enduringly popular and, by the 1960s, had emerged as the unofficial national anthem of country music, sung at celebratory moments and in moments of crisis by generations of Grand Ole Opry stars and engraved in the rotunda at the Country Music Hall of Fame.  Its title was … “Can the Circle be Unbroken.”  Not “Will,” but “Can.”

This is not the time or place to explore the strange history of that song (the time and place was March 4, 2016, in an entry on this very blog, which you can find right here).  The important thing is that Carter was experiencing a sensation common to most of us when we listen to country music:  “That isn’t how it goes.”

You might assume that, when a country singer (say, me) chooses to sing a song by another artist, that it’s a song he particularly loves; most of the time you’d be right.  You’d also assume that he’d sing it the way the original artist sang it.  You’d be wrong.

We all change the music around to suit our own voices and instrumentation.  When I sing Johnny Cash’s hit “Ring of Fire” (1962), written by June Carter and Merle Kilgore, I’m playing the piano, not the guitar, and I don’t have a Mexican horn section kicking around.  I also don’t have a generationally great bass voice like Johnny Cash, so I don’t sing it in the same key.  So what?  In 1996, when Cash covered Hank Snow’s classic “I’ve Been Everywhere” (1962), written by Geoff Mack, he changed the arrangement and changed the key.

That’s music, though.  Words are a different story, and as the years go by they too get changed.  Sometimes the reasons are obvious:  If it’s a song originally recorded by a female singer—say, “Why Can’t He Be You?” (1962), a hit for Patsy Cline—and it’s being recorded by a male artist—say, Hank Cochran, who had written the song in the first place—it turns into “Why Can’t She Be You?”

Sometimes, though, the reasons for the change are less obvious.  Usually they reflect the subjective preferences of the cover artist and his/her producers.  For example, when Willie Nelson recorded Fred Rose’s “Blue Eyes Crying in the Rain” (1975), he was following in the footsteps of iconic stars Roy Acuff and Hank Williams, who had recorded the song in 1947 and 1951 respectively.  His performance was quite similar to theirs—but he completely omitted one of Rose’s verses.

Presumably his reason was that he liked the song better without it, and he wasn’t alone:  The song had been a flop for Acuff and a dud for Williams, but it became Nelson’s first-ever No. 1 hit.

How can that be all right?  How’s it any different from cutting the raunchy parts out of Shakespeare’s plays, as Thomas Bowdler did in a famous, much-derided edition in 1818, or painting clothes onto a classical nude?  How is it any different from rewriting “King Lear,” as Nahum Tate did in 1681, because you like it better with a happy ending?

In an age of sensitivity to intellectual-property rights—and particularly in a genre like country music, which prizes authenticity as a cardinal virtue—can there be any excuse for monkeying with a songwriter’s original intention?

If you ask me, yes.  Country music was founded on that notion, its birth as a creative force in mid-20th-century America driven by the music of Jimmie Rodgers and the Carter Family.  Their songs were credited to Rodgers and to A.P. Carter respectively, but they were substantially (or not so substantially) altered versions of songs written by other people.  Since the dawn of country music, artists have taken other artists’ work and reworked it—to one degree or another—to reflect their own tastes.

Maybe they consciously thought they were improving it, maybe they didn’t even realize they were changing it—we’ve all had the experience of singing a song and later realizing that we had the lyrics wrong.  The important thing is that the music evolved, and it continues to evolve.

Often the music has benefited:  If Nelson hadn’t picked up “Blue Eyes Crying in the Rain” and made it his own (including hacking off one of Rose’s verses), chances are that today the song would be known only to a handful of aging Acuff and Williams fans, a near-forgotten detail of their creative outputs.  Instead it’s an acknowledged country classic, known and loved by millions of fans and recorded by any number of other artists since 1975. 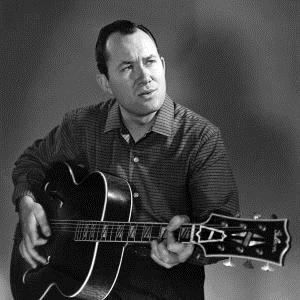 Don Gibson, a fine singer and an all-time-great songwriter.

Among the songs I perform in my own shows has been Don Gibson’s “I Can’t Stop Loving You,” originally recorded by Gibson himself in 1957, but best known today in versions by Kitty Wells (1958) and Ray Charles (1962).  The obvious model for me is Gibson’s recording (because he’s a guy, unlike Wells, and because he sings the song in a relatively straightforward style, unlike Charles), and I love his recording and emulate it in various ways.  But I change the words.

This isn’t a gender issue, nor is it about socio-political sensitivities, as is often the case in covering older songs.  (I recently watched Bing Crosby’s “Mississippi” (1935), which features the classic Stephen Foster song “Old Folks at Home” (1851); it’s the first time I’ve ever heard it sung with the original lyrics, which include the word “darkies,” and I expect it’s the last time I ever will.)

It’s because I think my version is better.  I change only two words, but I think they’re important words and that the change works well enough to justify messing around with the work of a better songwriter than I am.  We all fall short on occasion, and I think these two words were one of the occasions when Gibson fell short.

I can’t stop loving you,
so I’ve made up my mind
to live in memories
of old lonesome times.
My first verse reads:

I can’t stop loving you
so I’ve made up my mind
To live in memories
of a lonesome kind.

Partly it’s that I’m persnickety about rhymes.  The great Hank Cochran, one of the best songwriters Nashville has ever seen, said the secret to writing a country song was:  “Make it short, make it sweet, make it rhyme.”  Not “make it sort of rhyme.”  The words “mind” and “times” don’t rhyme; they’re assonant (they have the same vowel sound), but they don’t rhyme.  The words “mind” and “kind” do rhyme.  The rhythm is also smoother when “old” yields to “a.”

(That Gibson was aiming for true rhyme, and not mere assonance, is clear from the comparable spots in the rest of the song, which feature “say/yesterday,” “few/blue” and “heart/apart,” all true rhymes.)

I sing plenty of songs which feature shaky rhyming, however.  The real reason I tweak Gibson’s lyric is that I can’t do my best singing on a lyric which doesn’t make sense to me, and his first verse doesn’t make sense, to me or to anyone I’ve ever discussed it with.

I understand the gist of the verse:  The protagonist is miserable because he’s lost the one he loves, and chooses to flee that misery by living in the past, in memory.  But why would he choose to flee one lonesome time by remembering another one?  The second verse, ending “so I’ll just live my life/in dreams of yesterday,” makes much more sense.

I think what Gibson is getting at here is that even sweet memories leave him feeling lonesome, because they remind him of what he’s lost.  But that doesn’t come through to me in his lyrics.  In my tweaked lyric, I think it’s clear that the memory itself is not of a lonesome time—it’s of a happy time, of what in the third verse he calls “those happy hours that we once knew”—but just of a kind that makes him feel lonesome now.

(Would I have made the tweak if it weren’t the first verse—if the overall subject of the song hadn’t been well established by the time we reached this lyric?  Maybe not.  But it is the first verse.)

The point is that the essence of art is the quest for perfection—for, in this case, the perfect words, set to the perfect tune, perfectly sung and perfectly accompanied.  There’s been more than one film version of “Mutiny on the Bounty” because, though all the versions have had considerable merit, none has been perfect; there’s been no remake of “Casablanca” (1942) , despite occasional mutterings, because the original is to all intents and purposes perfect.  Why make a new one, if the ideal version already has been achieved?

We keep singing the old songs to honor their brilliance—and we keep tweaking their words and their melodies, playing with new arrangements, because they are brilliant but not perfect.  Our versions aren’t perfect, of course, but ideally they’re a tiny step further along the road to perfection.  In most cases that goal will never be reached, but that’s OK.  We’ll keep trying.

That’s what A.P. Carter was doing back in 1935, when he sat down to work on Ada R. Habershon’s lyrics to “Will the Circle be Unbroken” and said to himself, “Hmmmm, wouldn’t that first word work better as ‘Can?”