If your interests are anything like mine—and if they aren’t, you’re reading the wrong blog—you wouldn’t dream of missing the new film I Saw the Light.  It’s a feature film about Hank Williams, with a big budget and some big-name actors.  Where do I get tickets?

As to the movie itself, you’ve probably got three questions, in this order:  How well does Tom Hiddleston play, and especially sing, the role of Williams?  How accurate is the movie?  And how good a movie is it?  So let’s get right to those topics. 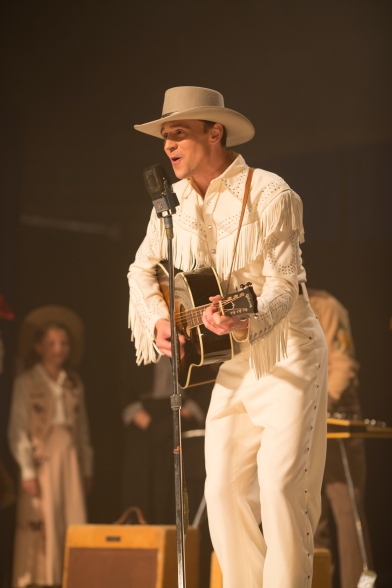 Predictably, the filmmakers got some flak about the casting of Hiddleston—a British actor best known as Loki in Thor (2011) and several subsequent Marvel films—as Williams, an American icon.  Country fans reacted the way that British film fans might respond to the news that Robert Duvall had been cast as Winston Churchill.  Wasn’t there a single American actor in Hollywood who was free that week?

In reality, this criticism is overblown.  It’s a legitimate concern that an actor or actress cast in a role requiring a radically different accent may spend so much time getting the accent right that he/she has no time left to shape a real performance.  However, let’s be clear about one thing:  Williams was born in small-town Alabama in 1923, and there aren’t any 20-something actors out there who talk the way he talked, no matter what country they were born in.  Even an actor born in rural Alabama in the late 1980s would have had to construct his accent pretty much from scratch, the same way Hiddleston did.

I’ve no doubt that a 90-year-old from Alabama could detect numerous inaccuracies in Hiddleston’s dialogue, but this 54-year-old from New York City found it flawless.  More important, Hiddleston captures the bony, raw-edged dynamism that everyone who knew Williams talks about.  His Williams comes across as ambitious, cagey, suspicious, sarcastic and, yes, sexy in the same way that the real Williams did.  It’s a performance that may well be remembered next Oscar season, and deservedly so.

A Voice You Couldn’t Forget

Once upon a time, actors playing real-life singers either ignored the way the singers actually sounded (James Cagney’s George M. Cohan in Yankee Doodle Dandy (1942) sounds nothing like the real Cohan does in recordings) or, as a matter of course, lip-synced the roles (as Larry Parks did in The Jolson Story (1946) and George Hamilton did in Your Cheatin’ Heart (1964), with the singing provided by, respectively, the real Al Jolson and the young Hank Williams Jr.).

No more.  Today’s actors hate to let so crucial an aspect of a role out of their clutches, but feel obliged to sound as much like the original as possible.  Hiddleston is no exception, and his performance ranks with the best of them:  Much more like Williams than Joaquin Phoenix was like Johnny Cash in Walk the Line (2005), and not far behind Sissy Spacek’s remarkable Loretta Lynn in Coal Miner’s Daughter (1980).

Which is not to say that any of them sounded as good as the originals.  Phoenix captured maybe 80% of Cash’s booming bass, Spacek maybe 90% of Lynn’s soaring mezzosoprano.  Hiddleston is perhaps 88% of Williams’ raw, piercing and remarkably expressive tenor.  All three are remarkable achievements, much better than I could do, but the missing 10-20% is important—it’s what made Williams, Cash and Lynn iconic voices.  If Williams had sounded the way Hiddleston does, he might have made a living at it, but we wouldn’t be listening to his recordings today.

Williams was one of the last generation of singers to come of age in a world largely without amplification.  Like Jimmie Rodgers, Roy Acuff and Ernest Tubb, he performed his earliest shows to live audiences in noisy bars, echo-plagued schoolhouses and rackety fairgrounds, and he learned to project his voice to cut through competing noise and reach listeners who might be some distance away and not necessarily paying attention.  There was a piercing, resonant quality to his voice, even when singing pianissimo, that simply isn’t there in Hiddleston’s version.

His take on Williams is also more studied and musically schooled than Williams’ own voice.  Part of Williams’ expressiveness comes from his constant variations in pitch and intonation:  He sneaks up on a note, strikes it a glancing blow, slides around it and then grabs onto it and rides it through to the end.  Hiddleston grabs onto it right from the start and, as a result, is both a better singer than Williams and a less effective one.

As to the film’s overall accuracy, here the bar is much lower.  With a handful of brief television appearances, totaling less than eight minutes, representing our only direct sense of Williams and his world, the competition is mostly the famously inaccurate Your Cheatin’ Heart.  I Saw the Light has it all over the earlier film in terms of accurate representations of time and place—ironically, since the 1964 film was made barely a decade after Williams’ death, when the world in which he had lived and worked was still very much alive, whereas the makers of I Saw the Light had to sweat over the accuracy of every automobile, every newspaper font, every hemline and every cheese sandwich.

Again, I wasn’t in Montgomery, Shreveport or Nashville in the late 1940s or early 1950s, and I’m sure the IMDB nitpickers will find plenty of goofs to chortle over.  Nonetheless, I judge a period film by an indefinable sense of rightness in terms of time and place:  Pearl Harbor (2001) didn’t have it, The King’s Speech (2010) did.  I Saw the Light does.

Accuracy, of course, is a different thing from quality.  The King’s Speech was a much better movie than Pearl Harbor, but it was the script, the direction and the performances that made it better, not the attention to the cheese sandwiches.  Goodbye, Mr. Chips (1939) is riddled with inaccuracies, but it’s one of the best movies ever made, deeply resonant and moving.

I Saw the Light is not one of the best movies ever made.  It’s blessed with some outstanding performances—besides Hiddleston, Elizabeth Olsen as Audrey Williams and Cherry Jones as Williams’ hard-nosed mother are the standouts—and some terrific production design, but the writing doesn’t live up to the subject matter.

One of the obvious problems in making a movie about Hank Williams is that his story is inherently depressing, the saga of a transcendent talent challenged and ultimately overwhelmed by his personal demons.  Your Cheatin’ Heart achieved a triumphant tone by largely ignoring the actual facts of Williams’ life; I Saw the Light acknowledges them, but as a result the movie is frequently downbeat, even sordid.  Williams was a great songwriter and an excellent singer, but he wasn’t a very nice person to spend time with, and the audience emerges from the theater well aware of that fact.

The makers of Walk the Line faced similar problems in telling the story of Johnny Cash, an egotistical drug addict who was cruel and neglectful toward his family and co-workers alike.  It dealt with this in part by whitewashing Cash, downplaying his cruelties and playing up his undeniable charm, but it also did so by bringing in a rich range of supporting characters, some as major players (June Carter, Luther Perkins), others as passing pleasures (Eck Carter, Maybelle Carter, Carl Perkins, Sam Phillips, Elvis Presley).

One of the fascinating aspects of life in Nashville in the 1950s is how small a town it was, at least as far as musicians were concerned.  Everybody knew everybody, so everybody overlapped.  Coal Miner’s Daughter is about Loretta Lynn, but it also offers a great portrait of Patsy Cline (Beverly D’Angelo) and cameos by Roy Acuff, Minnie Pearl and Ernest Tubb as themselves.

[Side note:  I aspire to contribute something to country music as an artist, but to date my biggest contribution has been as a film buff:  Several years ago, spotting the uncredited cameos by Acuff and Pearl, I noticed that they weren’t mentioned in the IMDB listing for the film.  I reported the omission to the IMDB, and was pleased when the information was added.  It ain’t much, but it’s something!]

Hank Williams was in the middle of this world, but you wouldn’t get that from watching I Saw the Light.  Kitty Wells and Johnny Wright were Hank and Audrey’s best friends, but they aren’t in the movie.  June Carter was godmother to Hank Williams Jr., but she doesn’t appear.  It’s mentioned that Williams’ mentor, Fred Rose, is Roy Acuff’s partner, but Acuff is never seen.  Tubb was instrumental in Williams’ making it to the Opry (despite his well-founded reputation as an unreliable drunk), but that isn’t mentioned and, while Tubb is onstage singing when Williams arrives at the Opry, he is heard but not seen. Red Foley’s band appears, but not Foley himself.

Doubtless some of these people were excised in order to keep the film to a manageable running time, and certainly they aren’t essential to the story.  However, they would have given the film some cheer, which it could definitely have used.  The most prominent real person in the film other than Williams is his wife, and Audrey seldom adds cheer to any scene she’s in.

(A note on Olsen:  Her performance as Audrey is terrific and may bring her an Oscar nomination—when she drops out of the film, it never really recovers—but one aspect of her work is problematic: her singing voice, which is significantly better than Audrey’s.  Her Audrey isn’t a great talent by any means, but she doesn’t capture the piercing quality of the real Audrey nor, in particular, her inability to sustain a steady pitch.  Anyone listening to Audrey’s recordings (not that I advise doing so) understands why her desire to be a country singer was such a bone of contention between her and her husband, but to someone who only sees I Saw the Light the objections of Williams and his bandmates seem harsh, even cruel.) 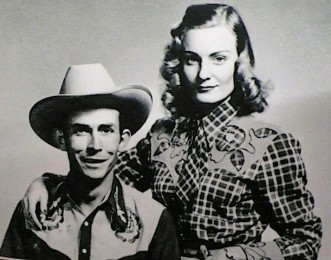 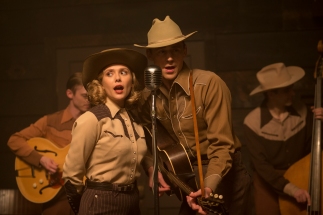 Most of all, I Saw the Light lacks a sense of why this story matters, why we should care about this self-destructive drunk who flickered briefly on the Nashville scene 60-odd years ago and then flared out.  We hear some of his best songs, capably though not brilliantly rendered by Hiddleston, but we don’t get a sense of his exceptionality, the degree to which even at the time people saw him as something special, something remarkable.

Williams’ story plays as a cautionary tale, rather than a story of the magic of creativity.  The noteworthy thing about him isn’t that he was an alcoholic womanizer and drug addict who at times was all but crippled by back pain, but that through all those obstacles he managed to create a small body of work which at this point has lived for twice as long as he did, and seems likely to live on into the distant future.

It’s too bad that more of that didn’t make it  into I Saw the Light.

One thought on “I Saw the Light: Hank Williams on His Way Downhill”