Arguments about the best album ever are for suckers, and that’s even truer of arguments about the best country album ever.  Setting aside the obvious fact that “best” is as subjective as a word can get, many of country’s greatest artists spent their entire careers in the pre-album era.  When Hank Williams, Jimmie Rodgers and the original Carter Family didn’t do a single album between them, what is there even to talk about?

That said, there have been more than a half-century of country albums by now, and if I had to name a candidate for best ever, I might well point to Kris Kristofferson’s Jesus Was a Capricorn (1972).

Kristofferson is a singular artist and, for all the honors showered on him by the country world, he’s always been somewhat outside the genre’s mainstream.  His movie-star looks—and, for that matter, his side career as a movie star—have made some country traditionalists look at him askance.  He’s also been a strongly liberal voice, or more accurately a strongly humanist one, even as the axis of country has moved rightward.

Most of all, he’s always been the smartest guy in the room.  Kristofferson wears his intellect lightly, but nonetheless this former Rhodes scholar is an odd fit in an industry which has long been suspicious of big words and literary pretensions.  If he didn’t get drummed out of Nashville for writing classic songs which referenced Voltaire’s Candide (1759) and John Steinbeck’s The Grapes of Wrath (1939), it may have been because Nashville didn’t recognize the references as such.

All three elements are amply displayed on Jesus Was a Capricorn (including his looks—he appears shirtless on the LP’s back cover), as is the one element that always earned him respect in Nashville:  He’s arguably the greatest songwriter of his generation in any art form. He wrote seven of the album’s 10 songs and co-wrote two of the others, and they’re all brilliant.  Kristofferson breathes the same rarified air as Bob Dylan, Willie Nelson and Paul Simon, writing songs that make new ideas seem eternal and doing it in a language all his own.

Of the three, he’s possibly the most like Simon, whose songs offer a field day to fans inclined to read the lyrics like tea leaves.  Kristofferson’s biography is well known, and many of his songs draw on it in ways that can’t be missed.  The second side of Jesus Was a Capricorn, for example, opens with the lacerating “Jesse Younger,” about a man who has been disowned by his family:

Little Jesse Younger was a well-respected lad,
doing all he could to please his mommy and his dad.
But he never planned
to be the man
they said that he’d become.
Somehow or another,
now his little baby brother
is his father and his mother’s only son.

The song is laced with anger, but also with sadness—and to anyone who knows that Kristofferson was himself disowned by his parents for leaving the military for a career as a singer/songwriter, it’s hard to hear it as anything but autobiographical. 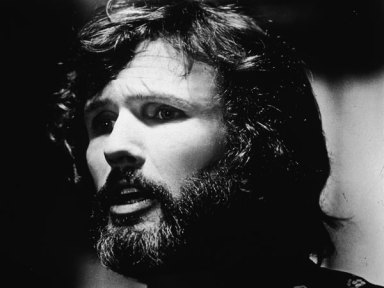 The same applies to many of Kristofferson’s songs.  Running through many of his greatest songs, including “Me and Bobby McGee,” “Sunday Morning Coming Down,” “Help Me Make It Through the Night” and “Casey’s Last Ride,” all from his debut album, “Kristofferson” (1970)—which, as those titles should attest, is another candidate for best country album ever—is an anguished dread at the prospect of being alone.

Jesus Was a Capricorn isn’t quite as overt in treating this theme, but the aching breakup songs “Nobody Wins” and “It Sure Was (Love)” capture the same sense of helpless isolation.  The protagonist in a Kristofferson song is as alone and alienated as the ones in songs by Hank Williams or Johnny Cash, but those songwriters see the attraction, the seductive simplicity of standing alone and free.  In Kristofferson’s world, though, solitude is loss:  “Freedom’s just another word for nothing left to lose.”

The saving grace of Kristofferson’s songs, what keeps them from wallowing in Simonesque solipsism and self-pity, is his sense of humor.  Even his bleakest songs have a dark wit to them, a savoring of irony and a delight in wordplay—puns, alliteration, assonance—that saves them from despair:

We’ve gone too far too long,
too far apart.
The loving was easy,
it’s the living that’s hard.

The angry title song, which leads off the album, could easily be read as a young, longhaired singer’s ultra-earnest attack on the establishment.  After all, the song opens with a broadside against critics of the hippies, especially Christian critics:

Jesus was a Capricorn,
he ate organic food.
He believed in love and peace
and never wore no shoes.
Long hair, beard and sandals
and a funky bunch of friends—
reckon we’d just nail him up
if he came down again.

It’s a powerful rebuke, but from there the song veers into a comic mode:

Here we’re on the turf of another of the great songwriters of Kristofferson’s generation, the brilliant humorist Tom Lehrer, who wrote in 1965:

Jesus Was a Capricorn is, like its predecessor, the work of a young man (Kristofferson was 34 at the time, but had been a full-time musician for only seven years) whose talent is bubbling over.  It has no throwaway songs, no quirky personal favorites that the listener isn’t really expected to get.  It has political songs, love ballads, stomping party songs and, of course, a crackerjack band that includes such esteemed Nashville pickers as guitarists Mac Gayden and Grady Martin, steel guitarist Weldon Myrick and bassist Tommy Cogbill, not to mention vocal help from the Jordanaires and, on four songs, the great Rita Coolidge, who would marry Kristofferson the next year.  Someone who didn’t speak English could love this album for the music alone.

The words make it, though.  Eight songs in it’s already one of the all-time great albums, but Kristofferson has two more tracks, and they’re both immortal.

The bluesy, seductive and altogether terrifying heroin narrative “Sugar Man” finds a hard, harsh edge to Kristofferson’s singing voice that we’ve never heard before, and its long, loping lines—it’s the longest song on the album—weave despair and grim resolution together into a song that doesn’t easily make its way out of the mind, even days after you’ve last listened to it.

And then, for the album’s final number, Kristofferson throws one more curveball in the form of the magisterial “Why Me.”  Having broached religion in the opening song in a sarcastic, satirical tone, Kristofferson returns to it for the final song, using a simple, personal voice that resonates all the more for being stripped of the lyrical and vocal flourishes that have characterized the previous nine songs.  With the despairing “Sugar Man” still ringing in our ears, it’s the perfect moment for a transcendent sense of peace, even joy.

Why me, Lord?  What have I ever done
to deserve even one
of the pleasures I’ve known?
Tell me, Lord, what did I ever do
That was worth loving you
or the kindness you’ve shown?

Kristofferson has used “Why Me” as his concert finale for decades now, and it’s not hard to see why.  Its tone of humble gratitude and amazed wonder speak to Christian listeners, of course, but there’s a lot in it even for those who approach it from a standpoint of agnosticism or disbelief.  As with Willie Nelson’s “On the Road Again,” it’s good to hear a pop star—and the author of the forlorn “Help Me Make It Through the Night,” at that—acknowledge that most of the time it’s actually really great to be a pop star.

Jesus Was a Capricorn is readily available on CD, though I like it best on the original LP.  As with all of Kristofferson’s work, it rewards repeated listenings, as subtleties of the lyric-writing, composition and arrangement (Fred Foster was the producer) emerge once you get past the raw power of the narrative.

Is this the best country album ever made?   There are plenty of other contenders for that honor, but it will do until the next one comes along.