When Vince Gill covered “The Soldier’s Sweetheart” (1927), the first song Jimmie Rodgers had recorded at the Bristol Sessions, he made some significant changes to the lyrics.

This wouldn’t be surprising—country artists often tweak the tunes or lyrics of the songs they sing, whether to reflect modern sensibilities, to make them fit more comfortably with the singer’s voice or simply because they like the tweaked version better—but Gill’s cover was part of Orthophonic Joy: The Bristol Sessions Revisited (2015).   For an archival project of this nature, one might have expected historic authenticity.

Most likely, though, Gill simply couldn’t handle the words as originally sung by Rodgers:

“Once I had a sweetheart, a sweetheart brave and true.
His hair was dark and curly, his loving eyes were blue.”

In Gill’s revised version, the lyrics run as follows:

“Once there were two sweethearts … “ 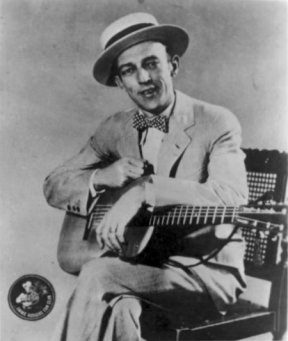 In today’s country-music world, it’s very, very rare for a man to sing a song in the voice of a woman, or vice versa.  It simply feels wrong.

I know this from personal experience.  I avoid covering most songs originally sung by women and, when I do sing such a song (for instance, Peggy Foreman’s “Out of My Head and Back in My Bed,” a 1977 hit for Loretta Lynn), I usually tweak the lyrics to reflect a masculine voice.  In my current show, Tennessee Walt’s Bristol & Beyond: The Birth of Country Music, in which period authenticity is important, I do sing a few female-voice songs without tweaks—“The Soldier’s Sweetheart,” the Carter Family’s “I’m Thinking Tonight of My Blue Eyes” (1929) and Jay Miller’s “It Wasn’t God Who Made Honky-Tonk Angels” (1952), which launched the career of Kitty Wells—and it feels, well, funny.

The issue here isn’t homophobia, misogyny or, in the case of a female singer, misanthropy.  The trouble with cross-gender songs has nothing to do with gender as such, but rather with a country tradition that runs back almost 90 years now.

Since almost its earliest days, country has embraced the theory of the straight-from-the-heart singer/songwriter, the idea that the singer is speaking for him/herself in a way that isn’t usually the case in, say, Broadway, pop or jazz.  There’s an assumption of authenticity in country music, a sense that the song is, to some extent, based on truth.  If Loretta Lynn’s fans learned that she was actually the daughter of an investment banker, “Coal Miner’s Daughter” (1970) would be just as great a song … but country fans wouldn’t embrace it nearly so much.

Proud to be an Investment Banker’s Daughter?

The further a song gets from authenticity, the more it counters that tradition—and gender identity is at the heart of authenticity.  Even people who knew nothing about his background would have recognized it as inauthentic if Johnny Cash had sung a song whose chorus went, “I’m proud to be a coal miner’s daughter.”

I have no idea how long it has been since there was a country hit in which a male singer sang in the voice of a woman, or vice versa, but I’ll bet it’s been a long time.  I can’t think of any, and I know a fair number of country songs.  It wouldn’t surprise me if there hasn’t been such a song since, oh, October 14, 1941, at about 1:05 in the afternoon.

I cite that specific moment because that was the last official recording session in the original Carter Family’s career.  While Rodgers rarely recorded cross-gender songs after 1927, the Carters did so regularly, with Sara Carter singing masculine lyrics in “Little Darling, Pal of Mine,” “I Ain’t Goin’ to Work Tomorrow” and “Chewing Gum” in 1928 alone.

The reason Rodgers and the Carters so carelessly violated one of country music’s standing rules is that there weren’t any country rules when they started out, because there wasn’t such a commercial genre as country music.  None of the songs they sang were written as country songs—they were blues songs, mountain ballads, hymns, Victorian parlor songs and the like, and they followed the rules of those genres.

One rule that those songs had in common was that there was no assumption of identity between the singer and the songwriter.  Prior to the Bristol Sessions, there was practically no such thing as a singer/songwriter.  Irving Berlin, Cole Porter and the Gershwins didn’t sing their own songs, any more than Stephen Foster (1826-1864) or Gilbert & Sullivan (1836-1911 and 1842-1900) had; Eddie Cantor, Al Jolson and Rudy Vallee didn’t write the songs they sang, any more than Jenny Lind (1820-1887) or Enrico Caruso (1873-1921) had.  George M. Cohan did both, but he was considered a freak of nature and his songs were rarely intimate or personal.

George M. Cohan: Not Straight from the Heart

The same applied to Rodgers and to the Carters … or so they thought.  They were slow to realize that things had changed, that they were doing something different in kind from what Lind, Caruso, Canter, Jolson or Vallee had been doing.  People looked at their songs differently than they themselves did.

The person responsible for this was Ralph Peer.  His business model (explored in yesterday’s blog post) relied on having copyrightable material, which meant songs that were original or that at least could be called original.  Peer pushed Rodgers and A.P. Carter to come up with such songs, which in practice most often meant not true originals but tweaked versions of old songs, sometimes with substantial changes and sometimes almost untouched.  Rodgers and the Carters sang them the way they’d always sung songs … but Peer copyrighted them as by Rodgers or by Carter, and their names appeared on the disks as the songwriters.

Most often they weren’t songwriters in the modern sense—at best they were adapters, at worst plagiarists—but the audience didn’t know that.  Looking at the disks, listeners saw that the songs were written by the people who sang them.  From there, it was only a short jump to imagine that the singers were writing about their own feelings and experiences, that the listener was getting the authentic story “straight from the heart,” as the cliché went.

Rodgers recognized this fairly quickly, and moved away from cross-gender songs.  He’d certainly made that leap by the time he wrote (with sister-in-law Elsie McWilliams) and recorded “Home Call” (1929).  This overtly autobiographical song, an encomium to his happy marriage that name-checked Carrie and Anita Rodgers, his wife and daughter, made the link between singer and song explicit.  (It was not released until 1932, likely because Peer felt that its picture of domestic contentment clashed with Rodgers’ lucrative image as a devil-may-care rambler.)

It was based, however, on Rodgers’ realization that there was something different going on.  “Home Call” had been preceded by a series of my-gal-done-me-wrong songs, and Carrie Rodgers had been accosted by angry fans who thought she wasn’t doing right by their idol.  “Home Call” was intended to set the record straight and, hopefully, protect her against further harassment.

Rodgers must have been taken aback by this development.  In “The Soldier’s Sweetheart” he’d sung about being a girl who lost her sweetheart in World War I, and nobody had sent him flowers.  Why were people suddenly taking songs like “I’m Lonely and Blue” (1928), “Any Old Time” (1929) and “I’m Sorry We Met” (1929) literally?

Rodgers was a sharp cookie, though, and he figured out what was going on.  From 1929 on, he usually avoided songs that clashed with his public image—a public image that was fairly close to who he really was.  He even put his own private dark secret on public display in the harrowing “T.B. Blues” (1931), knowing that his frequent cancellations of live shows had made it an open secret that he was a late-stage tuberculosis patient.

The Carters never really changed their style, in part because they lived in a remote area and had  little direct contact with their fans and in part because they didn’t really think much about show-business ideas like public image.  (The bizarre photos they used for publicity, in which Sara and, especially, A.P. look uncomfortable and resentful, are a remarkable contrast to Rodgers’ modern-style, glamorized publicity shots.)  They sang cross-gender songs right up to the end, and apparently never considered how they might strike listeners.

The Glamour of Show Business

In essence Rodgers and the Carters started out as pre-country artists, and country music grew up around them.  Rodgers quickly adapted and became the first great country solo artist, which is one of the main reasons that his songs remained marketable for mainstream country artists into the 1980s, covered by artists from Ernest Tubb and Hank Snow to Johnny Cash and Merle Haggard.  Meanwhile the Carters stayed who they had been, and by the 1960s were widely regarded as folk singers rather than country singers.

The idea that Rodgers and A.P. Carter were writing “straight from the heart” would shape country music (and its offspring, rock ‘n’ roll) from the 1930s to the present day.  Younger artists such as Tubb, Snow and Hank Williams started out writing songs about their own feelings and experiences, mistakenly thinking that they were following in the footsteps of the Carters and, especially, of Rodgers.  When those songs caught on, the next generation of aspiring country stars, people such as Cash, Haggard, Loretta Lynn and Dolly Parton, did likewise.

“Straight from the heart” became not only country’s practice, but its pride.  There were always singers who didn’t write, people like Kitty Wells, Ray Price and Patsy Cline (for whatever reason, country has been more accommodating to women who don’t write than to men who don’t), but most of the ones considered the real greats were singer/songwriters, and they wrote songs that reflected their own feelings and experiences.  For every Price there were two Kris Kristoffersons or Willie Nelsons, for every Cline two Lucinda Williamses or Taylor Swifts.