There are various reasons that the Bristol Sessions are widely viewed as, in Johnny Cash’s words, “the single most important event in the history of country music.”  Most obviously, they launched the careers of country’s first enduring stars, Jimmie Rodgers and the Carter Family.

(The word “enduring” is key, of course.  Vernon Dalhart had scored an immense hit with “The Prisoner’s Song” (1924), a proto-country song, and went on to record many more.  But Dalhart’s career was over by the mid-1930s, eclipsed by Rodgers and the Carters, and in any event country songs were only a small portion of what he recorded.  Operetta, show tunes, swing, classical—Dalhart could and would record pretty much anything.  He was a star, to be sure, but only incidentally a country star; and by the 1940s few fans of country music had any idea who he was.)

The Bristol Sessions are arguably equally important as an embodiment of what country music was to be, even—if I may reveal my colors as an English major (Oberlin College, 1983)—as a manifestation of country’s guiding metaphor.

Bristol was, above all else, a city of betweenness: Its main street ran down the Tennessee/Virginia border, and three other states were within 50 miles.  It was neither mountains nor plains, but in the foothills.  Neither rural nor metropolitan, it was a small city in the country.  All of this betweenness, however, could instead be looked at as combination:  Bristol was both Tennessee and Virginia, both city and town, both mountain and valley.

Country music, as it emerged in the wake of the Bristol Sessions, would likewise be a manifestation of betweenness turned into combination:  It would be both blues and mountain ballads, both professional and homegrown, both religious and secular, both conservative and liberal.

There was also a little-known subculture of African-American country artists, black men (and an occasional woman) influenced by Jimmie Rodgers and the Carter Family who played a blues-heavy country from the 1930s into the 1960s.  Their music is little known because racism largely kept them off the Grand Ole Opry and the major record labels, confining them to small clubs and micro-labels specializing in “race music.”  Occasionally some of their stars made it into the fringes of the mainstream—notably DeFord Bailey, an Opry regular from 1927 to 1941—but more often as sidemen then as solo artists.  I don’t know enough about this subculture yet to write about it, but I aspire to learn more and will write about it when and as I do.

I’ve already devoted a blog post to the African-American influence on the Bristol Sessions, so instead let’s look at a different kind of betweenness/combination, the mix of the religious and the secular.  In particular, let’s look at “I’m Bound for the Promised Land,” recorded by Alfred G. Karnes at the Taylor-Christian Hat Company building on July 29, 1927.

Displaying remarkable chutzpah, Ralph Peer copyrighted this song in his own name.  It’s hard to believe that he got away with this, since Samuel Stennett’s original words date from 1787, and the tune (by someone identified only as “Miss M. Durham”) was published in 1835.  By the time of the Bristol Sessions, it was a classic of country gospel, heard at hundreds of small, rural churches across America every Sunday.

To get a feeling for what the song sounded like in this form, check out this version by Hank Williams and the Drifting Cowboys, performed live on the “Mother’s Best” radio program in 1951. 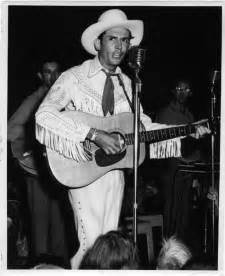 There’s a lot to like about this recording.  This is probably the Drifting Cowboys’ best period, when Williams was in relatively good shape and the band was working regularly, both on the morning radio program and in live performances across the South and beyond (these recordings survived because they were recorded in advance, to cover mornings when Williams’ touring would keep him too far from the WSM studios to record live).  The harmonies are tight, the instrumentals are propulsive and Williams is in his element singing old-time country gospel.

There’s no reason that the version by Alfred G. Karnes should rival Williams’ recording, let alone surpass it.  Karnes was a fine singer, but Williams was an immortal; Williams had a crackerjack band, while Karnes was alone in the studio, accompanying himself not on the fiddle or guitar but on the cumbersome harp-guitar.  And, of course, recording technology had grown immeasurably during the 24 years between these recordings, entirely to Williams’ benefit.

Nonetheless, Karnes’ version blows Williams’ version—and a later one by Johnny Cash—out of the water.  The reason, in a word, is syncopation.  Where Williams, Cash, et al. sing the song dynamically but squarely, Karnes interpolates a bouncy syncopation which pushes the song forward.  His version is actually slightly slower than Williams’, but it feels faster, more energized.  Karnes’ interpolated harp-guitar licks at the middle of each verse and chorus are also powerful, ensuring that the song keeps driving forward even as he catches a breath.

A couple of days before this recording, Karnes apparently had sat in with Ernest Phipps & His Holiness Quartet, lending his harp-guitar to back Phipps on six songs in the dynamic, surging style of music known as Holiness Singing.  Karnes knew Phipps well—they were both singing preachers from Corbin, Kentucky, though of different sects, and they probably traveled to Bristol together—and the influence of Holiness music is clear in his take on “I’m Bound for the Promised Land,” which is unlike any other recording of the song that’s come to my notice.

Holiness singing, often associated with the Pentecostal faith, is characterized by a driving beat, overt emotionalism and, often, syncopation.  All of the above was probably picked up from the black church, and it stood in sharp contrast to the staider music that characterized the mainstream Baptist and Methodist faiths of the day—which often denounced Pentecostalism and its music as Satanic in form, if not in content.

When Karnes take a classic English hymn and livens it up with syncopated verve, he’s fusing white and African-American elements to create something new—new enough, Peer apparently felt, to be copyrightable as original. That’s what was happening throughout the Bristol sessions, whether in the literally black-and-white collaboration of El Watson and Charles Johnson or in the African-American-infused music of Blind Alfred Reed or Jimmie Rodgers.  The African-American influence on the Carter Family was still to come, but already country music was edging onto new ground, standing between two forms and combining them into something new.

Karnes wasn’t going to be part of that new form.  He recorded for Peer again in 1928 and then went home to Corbin and spent his remaining 30 years as a singing preacher, forming a family act and giving pre-church concerts on the courthouse steps of the four towns in which he held a pulpit.  What his music sounded like then we can’t know, but in 1972 a gas-station owner in Lancaster, Kentucky, talked to a researcher and testified to its power, which lingered even decades afterward.

“I’ve seen old men who’d never been in church in their lives, sometimes so crippled they could barely walk,” he recalled, “but they’d come to hear ‘em.”

(Haven’t heard enough of “I’m Bound for the Promised Land?”  Here’s one more version, by the Mormon Tabernacle Choir, with no discernible African-American influence.  They’ve got at least 400 people, counting singers and orchestra, but I still prefer Karnes’ take.)