Aficionados of classic country acknowledge the original Carter Family as among the wellsprings of country music. The hundreds of songs recorded by A.P., Sara and Maybelle Carter in the 1920s and 1930s are considered foundational works.

Their last album, Country’s First Family (1976), demonstrates that this perception is grossly unfair. Produced by Jerry Crutchfield for Columbia Records, it ranks among the decade’s best country albums, with not a miss among its 10 songs. 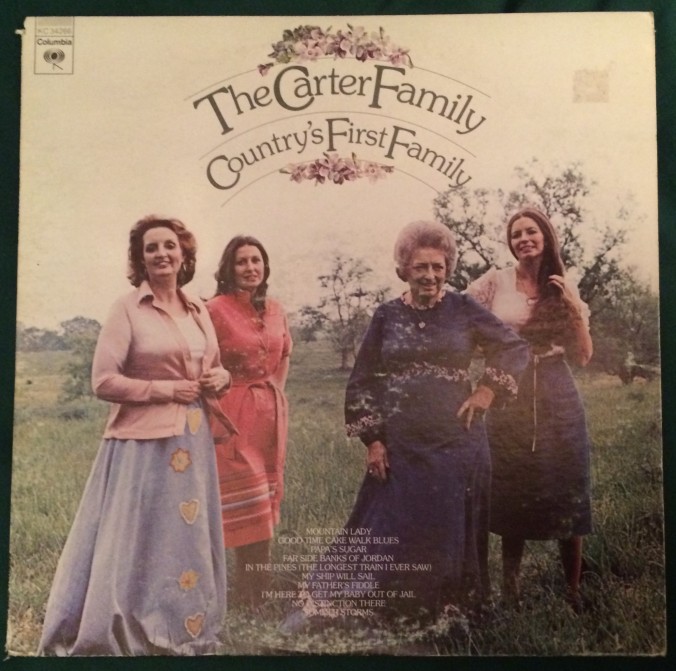 The Carters were far more musically eclectic than Maybelle’s first group, in large part because of the sensational voice of Anita Carter. All of the Carters were excellent singers—Maybelle and Helen sounded remarkably alike and had a charmingly straightforward simplicity, while June had a huskier voice and a flair for comedy—but Anita had one of country’s greatest voices, a soaring soprano unlike any other Carter’s. Familiar to Cash fans for her stratospheric backups on such songs as “Were You There” (1962), Anita (who was also a prolific session bassist) ranks with Patsy Cline and Loretta Lynn as the best female country voices of their generation.

Country’s First Family mixes religious themes and secular country, in the longstanding Carter tradition, and except for the comparative lushness of its orchestration and production makes little concession to the country trends of the mid-1970s. As a result, today it plays as far less dated than most of that era’s albums, including Cash’s.

Also in the Carter tradition, the album is very much a family affair. Three of Maybelle’s grandchildren—June’s daughter Carlene Carter; Anita’s daughter, Lorrie Davis; and Helen’s son, David Jones—appear as backup singers, instrumentalists or both, and Cash is a constant background presence: hosting some of the recording at his House of Cash studio, “bassing in” (as A.P. Carter used to say) on the opening number, “My Ship Will Sail,” writing the moving “Mountain Lady” (which perhaps owes a debt of gratitude to John Denver’s 1971 hit “Take Me Home, Country Roads”) and even taking the cover photo.

Unlike the original Carter Family, in which Sara Carter sang lead vocals on all but a handful of their songs, the latter-day Carter Family allowed all four women to sing lead at different times, while also giving the ones not singing lead substantial opportunities in the ensemble. Anita’s leads are the most striking—her richness and power makes the rueful, contemplative “Summer Storms” the album’s best song—but by this time all four women were professionals with at least 30 years’ experience, and every lead vocal is impeccably suited to the demands of the song.

The album’s religious songs, including “My Ship Will Sail,” “No Distinction There” and “Far Side Banks of Jordan” (which June and Cash reprised on her 2000 Grammy-winning album Press On) have a strong gospel element, with big, swelling ensembles and brisk tempos that avoid self-indulgence. All three are excellent.

The song most reminiscent of the original Carters is “I’m Here to Get My Baby Out of Jail,” frankly sentimental but never wallowing. June solos on the infectious party song “Good Time Cake Walk Blues,” and Anita brings conviction to the sentimental “Papa’s Sugar”—which, admittedly, is a tad too contrivedly sentimental for me. “My Father’s Fiddle,” with another Anita lead, also is sentimental, but carries its sentiment better.

From beginning to end, Country’s First Family is a pleasure to listen to, an overlooked gem. (It peaked at No. 49 on the country charts.) I’m less satisfied with the packaging—it lacks songwriter and instrumentalist credits, and even gets the song list in the wrong order—but that’s a small complaint in the big picture.

The album never has been released on CD (how is it possible that the indispensable Bear Family Records has never collected the Carters’ output in an omnibus CD package?), but is readily available online in the original LP—I bought my copy used for less than $1. It may take a little time to track it down, but Country’s First Family is well worth the effort.