Mention the Bristol Sessions, and anyone who’s visited the Country Music Hall of Fame (or, better yet, the Birthplace of Country Music Museum in Bristol) will know what you’re talking about.  After all, the sessions brought together three iconic members of the Hall of Fame at the beginning of their country careers: producer Ralph Peer, singer Jimmie Rodgers and the original Carter Family.

Even repeat visitors to those museums are often stumped, however, when asked what other inductee of the Country Music Hall of Fame was there for the Bristol Sessions.  One ingenious answer is, sadly, incorrect:  Helen Carter, the eldest of Maybelle Carter’s three daughters, was at the sessions in utero—she wouldn’t be born until September 27—but neither she nor Mother Maybelle and the Carter Sisters has ever been elected to the Hall of Fame and, while Maybelle and her daughters sometimes performed as “the Carter Family” in later years, the Carters’ induction covered only the first generation of the storied family.

No, the correct answer is Ernest V. “Pop” Stoneman. 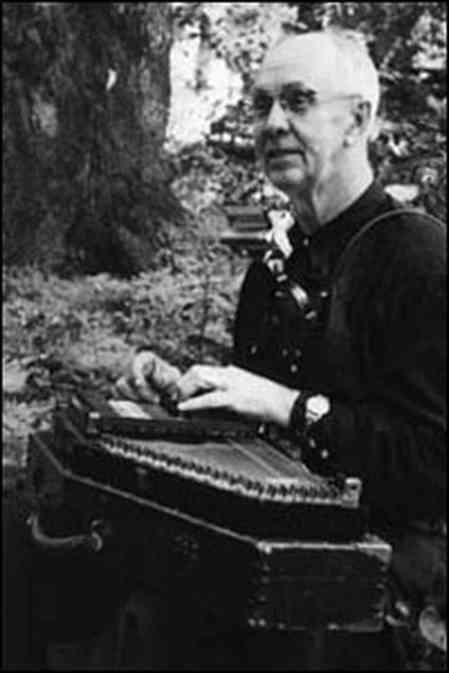 It would have amazed most people at Bristol in 1927 if they had been told that Jimmie Rodgers and the Carter Family would be among the biggest names in American music by the end of 1928, while Ernest Stoneman’s recording career would be essentially defunct.  Rodgers and the Carters arrived at Bristol as complete unknowns, while Stoneman wasn’t looking for the Bristol Sessions—he came to Bristol already a star.

The availability of Stoneman, who lived in Galax, Virginia, had helped persuade Peer to hold a recording session in Bristol in the first place.  Peer had recorded Stoneman in 1925 for Okeh Records and later for Victor, and those records sold well.

Stoneman was Peer’s ace in the hole at Bristol, and he respected the 34-year-old singer/guitarist enough that he offered him a princely $100 per side—double the rate offered to all the other artists at Bristol—to lure him to the sessions, and devoted the entire first day of the sessions to Stoneman and his family.  It was widely reported that Stoneman had earned $3,600 in Victor royalties in 1926, a considerable sum in those days.

Until 1924 Stoneman had worked as a carpenter, singing strictly to amuse himself and his large family (he and his wife, Hattie, would have 23 children, 13 of whom survived to adulthood).  Then he heard a recording of “The Sinking of the Titanic”—by Henry Whitter, another Bristol Sessions artist—and felt that he could do better.  He headed for New York, where he found that Okeh agreed with him.  He made a series of successful recordings, starting with “The Sinking of the Titanic” (1924), an early iteration of the familiar “It was sad when the great ship went down” song, and during the 1920s released more than 200 songs in all.

Peer had hoped for big things from Stoneman’s Bristol recordings, but none of the 15 songs in which he participated (sometimes as lead singer, sometimes only on guitar, harmonica and/or spoken voice) caught on.  By early 1928 both Rodgers and the Carters had eclipsed him, though he continued to record frequently—including 16 more sides for Peer at the 1928 Bristol Sessions, though he had lost pride of place to Ernest Phipps & his Holiness Quartet, another returning act. 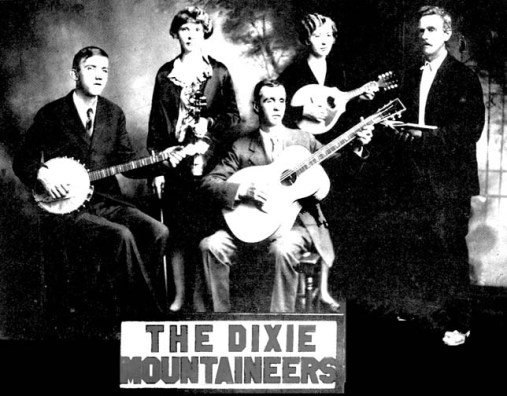 One of several names under which Ernest V. Stoneman recorded at Bristol was the Dixie Mountaineers.  Stoneman is at center with (from left) Bolen Frost, Hattie Stoneman, Irma Frost, Uncle Eck Dunford.

By that time, probably prodded by the success of the Carter Family, Stoneman had rebooted himself as the lead singer of the Stoneman Family, the title under which half of his 1928 Bristol songs were released.  However, anyone who had more than a dozen children was a family act looking for a place to happen, and in 1927 his Bristol songs had featured his wife on vocals and fiddle, his cousin George on banjo, his brother-in-law and sister-in-law on banjo and organ, respectively, and his cousin-in-law, “Uncle Eck” Dunford, on fiddle and spoken word.  In all, Stoneman came to the 1927 Bristol sessions with an entourage of at least 11, mostly kin and a couple of neighbors.

By 1930 it looked as if the Bristol Sessions might have been Stoneman’s high-water mark.  The Great Depression savaged record sales across the board, even for big sellers like Rodgers and the Carters, and Stoneman was hit especially hard. He had only one recording session between the end of 1928 and the end of World War II, and the six songs released from that 1934 session sold nothing worth mentioning. In 1932 the Stonemans moved to Washington, D.C., in pursuit of carpentry work.  They were desperately poor, and occasionally squatted in unfinished homes on which Stoneman had been hired to work.

Things brightened with the war, during which the economy improved and Stoneman found regular work in a munitions plant, and his interest in music was rekindled.  After the war he revived the Stoneman Family, this time featuring his children:  Stoneman still sang, but a big part of the new act’s appeal was Scotty Stoneman’s brilliant fiddling, Donna Stoneman’s mandolin and Jim Stoneman’s string bass.

The Stonemans spent the late 1940s and 1950s performing live, including a 1956 appearance by “Pop” Stoneman on the NBC quiz show The Big Surprise, on which he won $10,000, and, later that year, the younger Stonemans winning on Arthur Godfrey’s Talent Scouts as the Blue Grass Champs.

The folk revival of the late 1950s brought them back into the studio, however.  They signed with Starday Records in 1961, prompting “Pop” Stoneman to finally retire and become a full-time musician, and with MGM Records in 1966. Their album Stoneman’s Country (1967) climbed to No. 13 on Billboard’s country chart.  Stoneman died in 1968, with the comfort of knowing that the Country Music Association’s reigning winner as Vocal Group of the Year in 1967 was … the Stoneman Family.

Patsy Stoneman replaced her father as lead singer, and the Stoneman Family continued to perform and to record into the 1990s.  Perhaps the most famous member of the family, however, was daughter Roni Stoneman Hemrick, who fiddled and did comedy (notably as Ida Lee Nagger) as a regular on Hee Haw from 1973 to 1990; now 79, she continues to perform occasionally and is the standard-bearer for the Stoneman legacy. 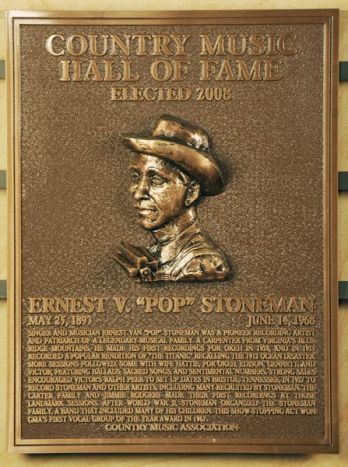 In 2008 “Pop” Stoneman was inducted into the Country Music Hall of Fame, hailed as “a pioneer recording artist and patriarch of a legendary musical family.”