The standard mythology about the Bristol Sessions has it that Ralph Peer drifted into Bristol on July 22, a stranger in town; that he placed an ad in the local paper and, as a result, hordes of aspiring country musicians came down from the hills to audition; and that among those hordes were Jimmie Rodgers and the Carter Family, whom Peer tapped with a golden microphone and swept off to fame, fortune and the Country Music Hall of Fame.

In reality, of course, things were far more organized than that.  Peer was a practical man, a businessman who didn’t like leaving things to chance.  Did he know what would come of his sessions in Bristol?  No, of course not—how could he?  But what happened was what he came there hoping would happen, and he did everything in his power to make it happen.

To begin with, the sessions weren’t Peer’s first visit to Bristol.  He’d made an earlier visit, in June, to find a suitable place to record and to scout out some local talent.  Recording technology had improved greatly in the previous couple of years, but it was still finnicky and had certain requirements in terms of space, ventilation, humidity and so forth.

Finding talent was the main item on his agenda, though. Before placing his own ad in The Bristol News Bulletin, he’d arranged for Victor dealers in the region, who routinely ran ads in their local papers, to include a mention of his session in their ads.

It was one of these ads, not Peer’s independent one, which brought the Carter Family to Bristol: A local Victor dealer named Cecil McLister assured A.P. Carter that the auditions were legitimate, and mentioned the $50-per-side (that is, per song) payment to anyone who passed the audition and recorded—a crucial inducement in persuading the skeptical Sara Carter and the seven-months-pregnant Maybelle Carter that the arduous (and expensive) trip to Bristol was worth making.

Peer also had made pre-arrangements with a number of area musicians, to ensure that he had some talent of known quality.  He’d contacted three acts whom he had previously recorded in New York for Okeh and/or Victor—the Johnson Brothers, Ernest V. Stoneman and Henry Whitter—and invited them to Bristol.  Many others might come in to audition, but the Johnsons, Stoneman and Whitter were coming to record, no question of auditioning.  Peer encouraged them to bring any other musicians they thought promising (Stoneman arrived with several cars full).  He even promised Stoneman, the sessions’ most prominent artist, a per-side rate of $100, double what anyone else earned at Bristol.

Even so, Peer wasn’t ready to leave things to fate.  Though his first few days’ worth of recording time was scheduled, he had nothing like enough signed-up talent for 10 working days in the studio.  He arrived in Bristol with only 10 musicians on his list, some of whom were completely unknown quantities.

Accordingly Peer reached out to the News Bulletin and invited the editors to send a reporter to observe a recording session firsthand.  On the morning of July 27, when Stoneman returned to the studio to resume recording, a reporter was in attendance.

(Peer probably deliberately scheduled the visit for July 27, rather than July 25 or July 26: Any embarrassing technical problems probably would occur on the first day, and on the second day Peer was scheduled to record the unknown Ernest Phipps & His Holiness Quartet; waiting an extra day to ensure that his biggest name was at the microphone was elementary good sense.)

Peer also made sure that the reporter heard what Peer wanted him to hear, which was, in a word, money.  Stoneman talked expansively to the newspaperman, and either he or Peer let slip (surely not accidentally) that Stoneman was making $100 a side, meaning that in that one day he would bank $600—at a time when an average wage in the area was well under $1,000 a year.  It also came up in conversation that, in the previous year, Stoneman had received $3,600 in royalties from Victor.

It was a colorful story with a strong local angle, and the newspaperman wrote a lengthy piece which the editors put on the front page of that evening’s News Bulletin.  The story was picked up in syndication by a number of other newspapers in the region, ensuring that the Victor Talking Machine Company’s Bristol auditions were on everybody’s lips.

“The story worked like dynamite,” Peer recalled in a 1953 Billboard interview, “and the very next day I was deluged with long-distance telephone calls from the surrounding mountain region.  Groups of singers who had not visited Bristol during their entire lifetime arrived by bus, horse and buggy, trains or on foot.”

The article’s most fortuitous connection came when a couple living in Bristol read the News Bulletin story and called their son, Jack Pierce, who was a musician. He was then in North Carolina, touring resort country with two other Bristol boys, Claude and Jack Grant, and a Mississippi-born singer named Jimmie Rodgers.

It has been suggested that the article may have been a put-up job, a quid-pro-quo with the News Bulletin on the basis of Peer’s advertisement and the local Victor dealer’s ongoing advertising.  This is possible, of course—in those days local newspapers always wanted to conciliate advertisers—but it seems unlikely.  Peer’s advertisement was not a large one, and the Victor dealer depended on newspaper advertising more than the newspaper depended on Victor advertising.

More likely, the glamour of show business and the luster of local pride—a big-name New York record executive is coming to Bristol in quest of quality music!—were sufficient to sell the editors on the story.  Certainly Peer, by supplying a celebrity interview subject and spinning tales of easy money to be made, did everything he could to reinforce the idea that this was big news.

One of the reasons Peer succeeded in Bristol when he hadn’t in Atlanta, Memphis or New Orleans may have been that, in a smaller city, his activities were bigger news.  Recording sessions, even for big-name labels like Victor, happened all the time in those cities, and newspaper editors were more jaded. Urban musicians were more likely to be savvy professionals a bit more skeptical of this impeccably suited record executive from New York who bore more than a passing resemblance to Commerce Secretary Herbert Hoover. 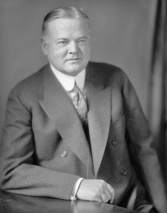 In Bristol, though, Peer’s visit was the biggest music story of the year—and, as it turned out, of the century.