It’s easy enough to see why Jimmie Rodgers caught Ralph Peer’s eye in Bristol.  A show-business veteran with the gift of the gab and a zest for self-promotion, Rodgers was a dapper dresser with a fine, flexible voice, brimming with self-confidence, and he had that yodel to set him apart from the crowd.  The songs he sang were up-to-date and free of religious cant.  He was clearly a star in the making, as he himself would be the first to tell you.

The Carter Family were a different story.  They were show-business novices who looked, dressed and acted like amateurs.  A.P. Carter was an awkward, taciturn individual who had struggled to convince his own wife that they should come to Bristol; Sara was skeptical and stubborn, Maybelle only 18 and seven months pregnant.  Peer was looking for fiddlers and banjo players, bright instruments which came across well on the recordings of the day, and the Carters played guitar and autoharp.  The lead singer was a woman (already one strike against them—while a few other acts at Bristol included women, none was the lead singer), and her voice sounded like a man’s.  They sang the same old songs, many of them religious in nature, that family groups across the South sang.

To send the Carters home would have been the obvious thing to do.  That’s what James O’Keefe, a representative for Brunswick Records, had done when A.P. and Sara auditioned for him the year before.  He didn’t like the idea of a woman-fronted act, and he didn’t think the autoharp would record well.  He suggested that A.P. have a go as a solo fiddler, but that wasn’t what A.P. had in mind.

Instead Peer jumped at the chance to record them.  When they auditioned for him on the morning of August 1, 1927, he immediately invited them in for a recording session that afternoon; when Anita Peer reminded him that his afternoon was booked solid, he promptly suggested an evening session.  When they’d worked for three hours and recorded four songs (as many as any other act in the whole second week would do), he suggested that they knock off for the night and come back in the morning for more.  (Sara and Maybelle did, recording two more songs; A.P. Carter didn’t, for reasons which remain obscure, as they often did with him.)

What was it that Peer saw that had eluded the man from Brunswick Records?  There were plenty of family acts to choose from—the Stonemans, the Shelor Family and Mr. & Mrs. J.W. Baker at the Bristol Sessions alone, not to mention brother acts like the Johnson Brothers and the Tenneva Ramblers.  Why did he single out the Carters for special attention?

Some of the reasons he wanted them probably were the same reasons that O’Keefe didn’t want them.  Then as now, the record business thrived on novelty—there were thousands of records issued every year, and getting noticed amid the crowd was a constant struggle.  A female-fronted group among a sea of male-fronted groups? a guitar and autoharp amid a mass of fiddles and banjos?  a contralto lead singer amid an army of sopranos and tenors?  All of that added up to something new on the scene, and new was good.

As far as Peer was concerned, old was also good.  The Carters’ repertoire of back-country ballads and folk hymns was exactly what he had come to Bristol looking for.  Peer wanted to sell records to people who lived in the back country, who loved that kind of music and knew or cared little for the more sophisticated sounds of the cities. The Carters were his target market, and that made them his ideal artists as well.

Because he had worked for years as a producer and stopgap engineer, Peer also knew that technology was changing quickly.  The new microphones were not only portable, but also far more sensitive. Artists who earlier had been shouting into a recording bell, now could perform in a more natural voice.  This increased the number of people who might conceivably be recording stars—and among that number was Sara Carter.

There was a reason why the singers of the early 1920s tended to be piping sopranos like Hattie Stoneman or Flora Baker:  Higher voices translated well onto records, lower voices less so.  This is also why fiddles and banjos, with their piercing tone, came across well.  The reason boils down to human anatomy—the ear picks up higher tones more readily than lower ones (perhaps as an evolutionary adaptation related to babies’ crying), which is why people’s voices get higher when they’re frightened.  This basic anatomical fact wasn’t applicable only to recording.  Sopranos, tenors, fiddles and trumpets were also the heart of live music in the pre-amplification age, when voices needed to cut through the murmur of a crowd or the hum of background noise.

O’Keefe might have been right about the Carters in 1922.  He might even have been right in 1926.  In 1927, though, he was wrong.  Sara’s voice, practically a baritone, came through on Peer’s microphones with a warmth that was compelling; the autoharp and, especially, Maybelle’s guitar had a mellowness which made most of the other acts recorded at Bristol sound strident. 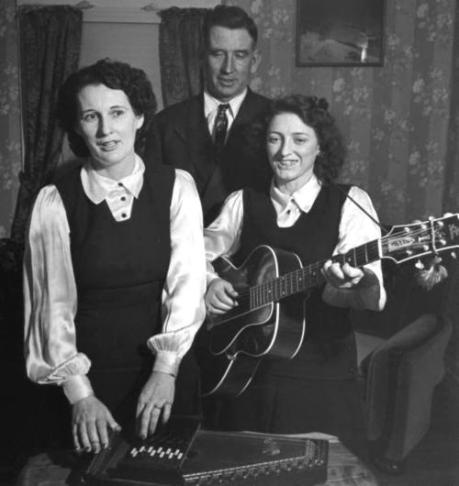 The Carter Family:  The only know photo in which they’re actually smiling.  Even Sara, sort of.

It also helped that there were only three of the Carters, that two of them lived together and that all three played together regularly.  Most of the rural family acts of the 1920s were much bigger, drawing on large families (Hattie Stoneman had 23 children, 13 of whom lived to adulthood) and giving every member an instrument or at least a voice.  This gave them power and the ability to muster some amazing harmonies, but it also made them clamorous and ragged.  The Carters were by far the tightest ensemble that played at Bristol, with their volumes balanced and their words distinct.  When Sara crescendoed, A.P. and Maybelle were right with her; when she slowed, they seemed to see it coming before she did.  We have no meaningful record of their rehearsal techniques, so we can’t tell whether this was the result of meticulous practice or simple attentiveness in the moment, but we can hear the results.

One thing Peer certainly liked about the Carters:  They already displayed the preparation and focus that would become their hallmark, and Maybelle and her daughters’ after them, for decades to come.  August 1-5 was amateur week in Bristol, but the Carters cut six songs in less than five hours.  Unlike Rodgers, whose poor health and lack of preparation would make recording sessions excruciatingly slow, the Carters came to work.

Peer had come to Bristol looking for something specific.  He wanted traditional music which would have commercial potential on records, and he wanted artists who combined the passion of an amateur with the work ethic of a professional.  He didn’t know what it would sound like, but he knew he’d know it when he heard it.

On Monday morning, August 1, he heard it. 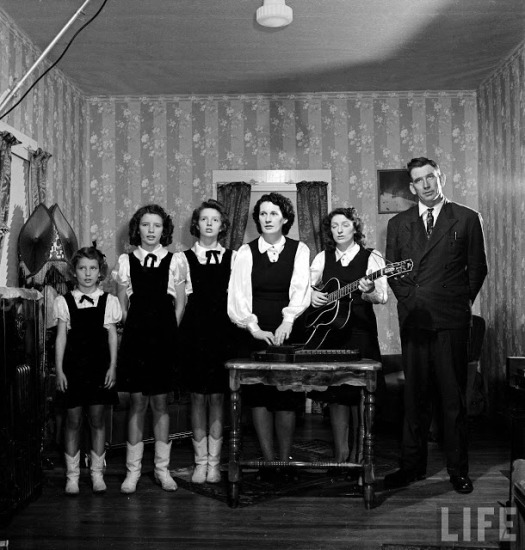 The Past, Present and Future of Country Music: (From right) A.P., Maybelle, Sara, Helen, June and Anita Carter in 1941.