Ralph Peer came to Bristol looking for traditional music that would have commercial potential on records—or, as he put it himself “old-time music.”  We know what he found—Jimmie Rodgers and the Carter Family, above all—but was it what he was looking for?  What was he looking for, specifically, and why was he looking for it?

Peer had the insight that was to shape his career in the record industry as early as the 1910s.  While still working in low-level management at Columbia Records’ Kansas City office, he had concluded that the record industry was overlooking some audiences and some artists too.  The artists he had in mind were black and/or rural artists working in the genres that would later become known as blues, jazz, country and gospel.  His central realization boiled down to this:  There was an audience out there that would buy records of these kinds of music—and an even bigger audience would go for them if they were good enough and properly packaged.

The record industry of the 1910s was focused on classical music and on the songs of Tin Pan Alley, as played by dance bands from New York and other big cities.  Its biggest name was Italian tenor Enrico Caruso, who started with opera and went on to Neapolitan folk songs and even American popular songs—his 1918 recording of George M. Cohan’s “Over There” was a top seller.  Its audience was primarily in the cities and suburbs, and it was big business.  The phonograph had been a novelty in 1910, when the Victor Talking Machine Company sold slightly less than 6 million records; in 1921 it sold almost 55 million records, and nobody was calling the phonograph a novelty.  All the other majors had similar sales booms.

Peer had started working for Columbia in the 1910s, and by 1920 he was ready for bigger things.  The record business was booming, and he wanted to carve out a place for himself in it.  His move from Columbia to Okeh Records in 1920 was, on the face of it, a step down, from one of the industry’s giants to a fringe company, but it gave him the two things he wanted: He received creative control as Okeh’s recording director, and he moved from Kansas City to New York, the hub of the recording industry.

Okeh was the perfect place for him.  Founded only two years before by Otto K.E. Heinemann (1877-1965), the company’s name was not related to the word “OK,” as was generally assumed, but rather was drawn from his initials.  The tiny company started with the same classics-and-dance-music repertoire as the big labels, but it struggled to compete for artists and for record-store space.  Heinemann began to look for niche markets in which he could be more competitive, and launched lines of Czech-, German-, Polish-, Swedish- and Yiddish-language recordings aimed at recent immigrants.

He was also receptive to the ideas of the young Missourian who wanted to look at other categories of artists and other markets beyond the big cities and their suburbs.  His faith in Peer was borne out when one of Peer’s first recordings for Okeh, Mamie Smith’s “Crazy Blues” (1920), became a hit—with black audiences, but also with the same white audiences who were making Harlem a hot spot for adventurous Caucasian partiers.  Clearly Peer had something there, and Heinemann was prepared to back him in exploring it.

Peer had made it to New York, but he realized early on that it would be difficult and expensive to pursue a business model based on bringing artists from the hinterlands to record in New York.  It would be hard even to figure out which artists would repay such attention, never mind the cost of travel, hotel rooms and the like.  As soon as the rapidly improving recording technology allowed, Peer hit the road.  In 1924 he carried the Okeh banner to New Orleans, where he staged the city’s first commercial recording sessions, focusing on blues and jazz. 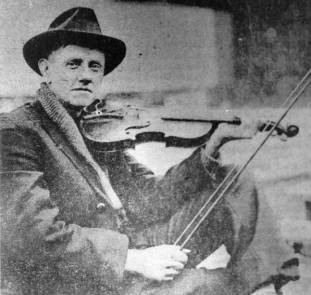 The genre later known as country music was also on Peer’s radar.  In 1923 he recorded what some consider the first country record, Fiddlin’ John Carson’s “The Little Old Log Cabin in the Lane,” backed with “The Old Hen Cackled and the Rooster’s Going to Crow.”  Carson was an indifferent singer but an amazing fiddler, and his record sold out its limited run virtually overnight.  Realizing that he had something worth having, Peer brought Carson back to New York for more.  “You Will Never Miss Your Mother Until She Is Gone” (1923) sold more than a million copies.

Carson would have another million-seller for Okeh with “Old Joe Clark” (1927), but by that time Peer had left Okeh.  In 1926 he moved to the Victor Talking Machine Company, which had taken note of Peer’s success at Okeh and wanted him to do the same for Victor.  Part of the appeal was Victor’s resources—its distribution, in particular, was far more comprehensive than Okeh’s—but the clincher for Peer was a unique deal which, if it paid off, would make him a rich man for the rest of his life.

Peer had worked for Columbia and Okeh on a salary basis, with his income climbing throughout the 1920s as his record choices paid off.  For Victor, though, he worked for $1 a year.  Essentially he was not an executive at Victor—though it paid for him to let people (such as the reporter from The Bristol New Bulletin who covered the Bristol Sessions) think that he was.  Peer was the chief executive of his own company, Southern Music Publishing, with which Victor had an exclusive distribution deal.  It was, in fact, the first real modern recording-industry contract, and would be the model for the way most of the popular-music business is run today, with the big record companies overseeing a bewildering array of labels run by artists, producers and freelance executives.

The name “Southern Music Publishing” said what needed to be said about what Peer was up to.  He had realized that it was the South, not New York, that had been driving American popular music business at least since the turn of the century, and arguably long before:  America’s first great songwriter, Stephen Foster, had made his name in the 1850s through minstrel shows, blackface entertainments in which white artists offered high-energy, banjo-driven performances of ersatz Southern music.

Actual Southern music had swept over America’s pop scene in repeated waves since the Dixieland craze that surged out of New Orleans in the first years of the 20th century.  Listening to the society dance bands and nightclub combos that made up the artist lists of the major record companies, Peer realized that they were all playing denatured versions of Dixieland, jazz and the blues.  Listening to Tin Pan Alley hits such as Irving Berlin’s “Alexander’s Ragtime Band” (1911) and George Gershwin’s “Swanee” (1919), and watching the Broadway cavorting of blackface stars such as Eddie Cantor and Al Jolson, whose records were top sellers in the 1920s, Peer saw more of the same: Southern music watered down and gussied up for Northern audiences.

As early as 1920, Peer had known what he wanted to do:  Go to the source.  Southern Music Publishing would be his vehicle.  Seeing the way Dixieland and jazz had conquered the popular-music world, Peer wanted to be in on the ground floor of the next waves.  He probably didn’t see exactly what country music or rock ‘n’ roll would be like, but he knew they were coming and he wanted in.  (He would be the publisher for such rock-‘n’-roll pioneers as the Big Bopper, Buddy Holly and Little Richard.)

Many of the acts that Peer auditioned and turned down at Bristol were capable musicians, but they were playing the pop hits of the day.  (One such band—the Jimmie Rodgers Entertainers—would be turned away on August 3 and told to come back if they had any old-time music.)  Victor didn’t need Peer to find such acts, of which it already had plenty, and Peer wasn’t interested in finding them.  He had something else in mind.

What Peer heard when he listened to Mamie Smith and Fiddlin’ John Carson, or to Jimmie Rodgers and the Carter Family, or to such later Southern Music artists as Louis Armstrong, Count Basie, Billie Maxwell, Jelly Roll Morton and Fats Waller, is hard to say, but part of it almost certainly was sincerity.  The songs of Tin Pan Alley were clever, but they weren’t heartfelt.  “Crazy Blues,” “The Little Old Log Cabin in the Lane,” Rodgers’ “The Soldier’s Sweetheart” (1927) and the Carters’ “Single Girl, Married Girl” (1927) were not as well-made as the songs that the Gershwins, Cole Porter and their like were cranking out, but they were straightforward and emotionally direct.

Peer was from Missouri, born in 1892 in Independence, eight years after future president Harry S Truman had been born there.  He’d learned the music business working for Columbia in Kansas City, and he knew that, while there was an urban market for frivolity, wit and double entendre, there also was a rural market for sincerity and authentic emotion.  He didn’t want the Jimmie Rodgers Entertainers because their show list of polished dance numbers had no heart to it; when their lead singer came back with some under-rehearsed songs sparked by a what-the-hell-was-that yodel, Peer heard something that was better than polished: He heard something real.

He wasn’t looking for latter-day minstrel songs, for Jolson-style “Mammy” songs, for some New Yorker’s vision of what life was like in the mountains, on the bayou or on the farm.  Peer was looking for something real, and he found it in Bristol.