The most important event of the August 3, 1927, Bristol Sessions happened not on the second floor of the Taylor-Christian Hat Company building, where Ralph Peer had set up his portable Victor Talking Machine Company recording studio, but rather across town at Mrs. Pierce’s boarding house. 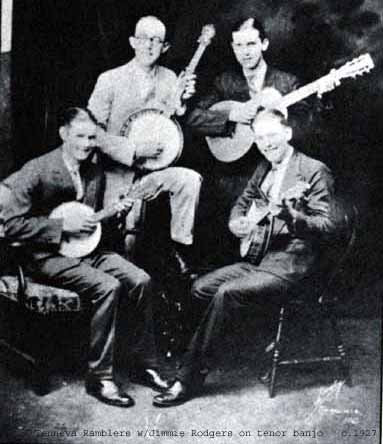 Different parties involved had different recollections of what went on, but all agreed on the general outline:  Jimmie Rodgers arrived in Bristol that morning as the leader of a four-man group called the Jimmie Rodgers Entertainers, which then auditioned for Ralph Peer and was granted a recording session the following day.  That night Rodgers and his three partners argued, to so great an extent that, by the end of the evening, it had been agreed that the next day Rodgers would audition as a solo act and his partners as a trio (a quartet, as it turned out—they roped in a Bristol acquaintance, Claude Slagle, to round out the band).

The significance of this quarrel can’t be overstated, because it was the making of Jimmie Rodgers.  A glib, self-promoting hustler, Rodgers was a solo act down to his fingertips and, except for a single recording session in which Peer teemed him (awkwardly) with the Carter Family, his audition for Peer alongside the Entertainers was the last time he’d ever work as part of a group.  If he and his partners had patched things up and recorded as a quartet, it’s almost certain that the results wouldn’t have been worth hearing.  It was only his literal eleventh-hour split from his partners that put Rodgers on the road to stardom.

Among the people who recounted the events of that day were Rodgers himself, his wife Carrie (who was with him and their daughter at the boarding house), Ralph Peer and Claude Grant, one of the original four Entertainers.  Their accounts diverge on many points (each wants to claim the split as his/her own idea), but the underlying truth is discernible, even if the specific details will never be conclusively determined.

To fans of classic rock or of contemporary country, the saga of Jimmie Rodgers and the Tenneva Ramblers (as his partners were before and after their work with him) will strike a familiar chord, because it has important similarities with the sagas of Fleetwood Mac and of the Dixie Chicks. 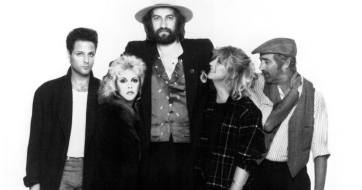 Fleetwood Mac originated in 1967 as a four-man British ensemble consisting of singer/guitarist Peter Green, guitarist Jeremy Spencer, bassist Bob Brunning and drummer Mick Fleetwood.  (Brunning was a late replacement for bassist John McVie, who had been playing with Green and Fleetwood in John Mayall’s Bluesbreakers. At first even naming the band after him wasn’t enough to convince McVie to leave a steady job with Mayall. Brunning stepped aside when, later that year, McVie agreed to come aboard.)

The band achieved significant success, recording several albums, but it endured regular lineup changes and disputes about its musical direction that kept it from gelling until the end of 1974, when two Americans, guitarist Lindsey Buckingham and singer Stevie Nicks, joined the band.  The new combination proved unstoppable, and its first album, Fleetwood Mac (1975), shot to No. 1 and made the band one of the era’s most enduring acts.

Fleetwood Mac’s internal dynamics continued to be baroque, however.  Without dissecting that lurid story here, it’s safe to say that the process by which the band was created lent itself to splitting into two camps and, while the group’s phenomenal success was enough to hold it together until 1987, it was never at peace with itself.

The Dixie Chicks originated in 1989 as a bluegrass quartet made up of sisters Martie and Emily Erwin, guitarist Robin Lynn Macy and bassist Laura Lynch.  Like Fleetwood Mac, the Dixie Chicks achieved a considerable degree of success, but they also endured lineup changes and disputes over musical direction: Where the original members of Fleetwood Mac resisted a drift from purer blues to a more pop-oriented sound, the original Dixie Chicks resisted a drift from purer bluegrass to a more pop-oriented sound.

Then, in 1997, singer Natalie Maines joined the Erwin sisters (each now married and working as Martie Maguire and Emily Robison), clinching the band’s move toward pop.  The new lineup’s first album, “Wide Open Spaces” (1998), was a sensation and launched the Chicks to superstardom.

Nonetheless, the dynamics are strikingly similar.  The Tenneva Ramblers were, like the Dixie Chicks, originally a Bristol-based quartet composed of two siblings (brothers Claude and Jack Grant, who played mainly guitar and banjo/mandolin respectively) and friends Jack Pierce (fiddler and son of the boarding-house owner) and comedian Smokey Davis, a cousin of the Grant brothers.  The band’s name came from Bristol’s location stride the Tennessee-Virginia border.  They were skilled at their instruments and solid as an ensemble, but they weren’t making much headway until April 1927, when they met a fast-talking, 29-year-old Mississippian named Jimmie Rodgers.  (In 1927, of course, Mississippi and Bristol were about as far apart as London and Los Angeles would be in 1974.)

Talking fast and furious, Rodgers told the Ramblers that all they needed to make it to the big time was to become his backup band.  Initially they weren’t impressed—Jack Grant, in particular, didn’t care for Rodgers—but his blandishments won them over, and in May they traveled to Asheville, N.C., where Rodgers had wangled a 15-minute radio show.

For Fleetwood Mac and the Dixie Chicks, riches and fame provided a potent power to counter the centrifugal force that always threatened to tear the bands apart.  The Tenneva Ramblers had neither, and didn’t seem likely to get either.  They already were nettled by Rodgers’ insistence that, rather than him becoming the lead singer of the Ramblers, they should become the backup band in the Jimmie Rodgers Entertainers.  When his promises of immediate riches fizzled and the radio show was canceled as of June 13, Pierce and the Grants began having second thoughts.

The only good gig Rodgers ever got the group came in mid-July, at the North Fork Mountain Resort—and then Rodgers insisted that they quit that job to go to Bristol and audition for a record company.  He sold them on the trip only by saying that he already had decided to quit the group to try his luck in Washington, D.C.

The quartet’s audition for Peer, on the morning of August 3, wasn’t a success.  Peer recognized the skills of the musicians, but he didn’t feel they meshed well and, in particular, he didn’t like their repertoire, which was the songs they had been playing at North Fork Mountain: dance songs and Tin Pan Alley hits.

“We ran into a snag almost immediately,” Peer later recalled, “because, in order to earn a living in Asheville, he was singing mostly songs originated by the New York publishers—the current hits.”

Peer’s inclination was to send the Entertainers on their way, but Rodgers thought fast.  Realizing what Peer was looking for, he assured him that the band could play old-time music and would, in fact, have some songs ready to go by the next day.  Peer had his doubts, but he saw Rodgers’ talent and agreed to record them the next afternoon.

Rodgers and the former Tenneva Ramblers weren’t in any sense a finely honed group.  They had come together only a couple of months before, and their creative instincts ran in opposite directions: Most obviously, the Ramblers saw themselves as an instrumental group that did some singing, while Rodgers saw the Entertainers as a singer and his backup band.  The need to figure out some new songs in an unfamiliar genre and put them together in a single night’s work placed enormous stress on the quartet, and soon the group was breaking down into a dynamic which would have seemed familiar to Fleetwood Mac or the Dixie Chicks: the old, stable group held together by family ties vs. the showy, loud-mouthed, johnny-come-lately singer.

In this dynamite-packed atmosphere, the reappearance of the old question of billing was a match thrown into the room.  Since Rodgers already had said that he was leaving, and the records would be issued well after he was gone, Jack Grant proposed that the band should return to its billing as the Tenneva Ramblers.  Claude, a conciliator by nature, suggested that they be called the Ramblers, but that the lead singer on each song also be identified—Rodgers on some, Jack Grant on others.

Meant to be helpful, this only intensified the disagreement, since Rodgers had no intention of ceding the lead-singer role to Grant or to anybody other than himself.  Rodgers and Jack Grant were the main antagonists, but Jack Pierce was sympathetic to Grant and Claude Grant wanted to stop fighting and get back to figuring out some songs that they could do the next day.  When Rodgers threatened to walk out and audition as a single, nobody tried to talk him out of it.

The next day Rodgers recorded two songs for Peer: “The Soldier’s Sweetheart,” featuring his own words to the familiar tune “Where the River Shannon Flows,” and the old chestnut “Sleep, Baby, Sleep,” gingered up with Rodgers’ yodeling, however inappropriate that might have been in a lullaby.  He accompanied himself on the guitar, and—particularly on the first song—sounded glummer and more lugubrious than he would on any later recording.  He livened up some for “Sleep, Baby, Sleep,” however, and that yodel intrigued Peer.

It’s tempting to imagine that, if the Ramblers and Rodgers could have held together for one more day, they might have become the Drifting Cowboys to his Hank Williams.  It’s unlikely.  Rodgers wasn’t an easy man to work with, and the breakup of their act had at least one advantage:  It saved them from the fight over how the royalties should be divided, which doubtless would have been even fiercer than the ones over songs and billing.  If the Ramblers and Rodgers had held together for one more day … they would have broken up on August 4 instead of August 3.

They wouldn’t be the Dixie Chicks, for whom the feminine instinct to conciliate and find common ground enabled Maines and her new partners to become close friends and even laugh at the group’s fraught dynamics.  Rodgers and Jack Grant, in particular, were two alpha males trying to rule the same domain.  They wouldn’t ever have been comfortable working together long-term.

They wouldn’t be Fleetwood Mac, which saw itself as a supergroup, each member seeing him/herself as the star, with stability to be found only in ever-shifting coalitions.  It was always going to be Rodgers against the Ramblers, and none of the other three musicians had an ego colossal enough to compete with Rodgers.

Doesn’t Play Well with Others

The Ramblers were surely staggered by Rodgers’ subsequent success—by the end of 1928 he was one of the biggest names in American popular music, and when he died in 1932 he was personally responsible for 10% of RCA Victor’s total sales—and they doubtless nurtured a few what-ifs, but they knew better.  Stardom was a glittering goal, but it didn’t glitter bright enough to be worth putting up with Jimmie Rodgers’ baloney.

In the end, Rodgers walked into the studio alone.  That was the way he wanted it.