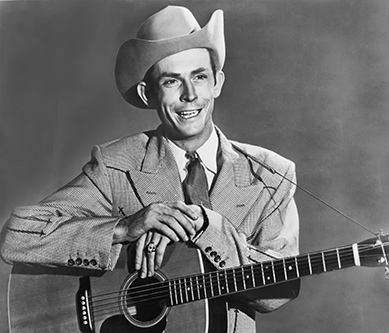 For a man whose recording career lasted barely six years, Hank Williams casts an immense shadow.  I’m currently doing a show called Tennessee Walt’s Hanks a Lot!—and most of the audience members seem to come in assuming that it’s a show of Hank Williams songs.  When they learn that I’ll be doing songs not only by Williams but also by eight other artists named Hank, they seem surprised.  Was there anybody else named Hank?

That’s not a slap at Hank Snow, Hank Thompson and the rest of the boys, it’s simply fact.  When you hear the words “country music” and then the word “Hank,” you expect the next word to be Williams.  Jimmie Rodgers may have been tagged “the Father of Country Music” and Roy Acuff “The King of Country Music,” but to most people today—even to most country fans—they’re names on a wall somewhere, if that.  Hank Williams … well, when his name is mentioned, even people who’ve never listened to a country song in their lives say, “country music.”

So iconic is Williams that it’s hard to believe that he might well have been alive today, which would have been his 95th birthday.  I’ve known plenty of people born before Hank Williams, one or two of whom are still alive.  It’s literally inconceivable what Williams would have been like—or what country music would have been like—if he’d gotten another 65 years of singing, writing and playing.

That Williams was a singular force in country music was clear during and immediately after his lifetime.  He wasn’t necessarily the biggest-selling artist of his day—Eddy Arnold and, briefly, Lefty Frizzell routinely outfought him for supremacy on the country charts—but there wasn’t a whole generation of subsequent country artists calling themselves “Eddy” or “Lefty.”  When Garland Perry Cochran, Walter Louis Garland, Clarence Eugene Snow and untold scores of lesser-known artists chose to assume the name “Hank,” they were merely acknowledging what seemed self-evident to them: “Hank” equaled “country music.”

What it was that made Williams so iconic is another question, however.  His shadow is all the longer for its mystery, for the fact that it’s hard to account for his unique status.  Yes, he was a great singer and songwriter, and he made a lot of great records; yes, he died young, and thus benefits from a romantic aura of lost possibilities, a la James Dean or Marilyn Monroe or Patsy Cline or Jimi Hendrix or River Phoenix.  But future generations of actors didn’t name themselves James or River, and the name “Jimi” is no more synonymous with rock ‘n’ roll than “Marilyn” is with movie stardom.

The most telling comparison is with Jimmie Rodgers, who was a bigger star than Williams (the year he died, in 1933, he personally accounted for 10% of RCA Victor’s total American record sales) and died even younger.  Rodgers’ impact on country music was enormous—at least four members of the Country Music Hall of Fame (Gene Autry, Jimmie Davis, Hank Snow and Ernest Tubb) began their careers as Jimmie Rodgers imitators—but he can’t match Williams’ profile.

According to the authoritative (but sometimes erroneous) Internet Movie Database, Rodgers has never had a filmed biography (Williams has had two) or even been depicted as a character in a film.  He’s been heard on the soundtracks to 43 films and television shows, versus Williams’ 198.  All this despite the fact that Williams survives on film in only three brief clips from television shows, whereas Rodgers starred in his own eight-minute theatrical short, The Singing Brakeman (1929).

Only three other members of the Country Music Hall of Fame are named “Jimmie” or “Jimmy,” and only Jimmie Davis spelled it the way Rodgers did.  All three were named “James” (or, in the case of Jimmy Dean, “Jimmy”) at birth, as also was the 1950s country/pop singer Jimmie Rodgers—who was born James Frederick Rodgers.  Merle Haggard, Hank Snow and Ernest Tubb all did Jimmie Rodgers tribute albums, but there have been at least 22 Williams tribute albums, including ones by Roy Acuff, Glen Campbell, Johnny Cash, George Jones, Jerry Lee Lewis, Hank Locklin, Roy Orbison, Ray Price, Charlie Pryde, Connie Stevens and the rock band The The.  There are a handful of songs written about Jimmie Rodgers, but more than 60 about Hank Williams.  In 2010 Williams was voted a posthumous Pulitzer Prize, an honor never extended to Rodgers or any other country artist.

So what is it that makes Williams so exceptional?  Johnny Cash had a better voice, Kris Kristofferson, Willie Nelson and Dolly Parton were better songwriters, Ernest Tubb had a better band, all of them put together didn’t have as many no-show performances as Williams did and all of them had careers lasting decades longer than Williams.  Why is it that they are enduring stars and Williams is an icon?

The bit in the last paragraph that probably set most readers’ teeth on edge was, “Kris Kristofferson, Willie Nelson and Dolly Parton were better songwriters.”  It’s an inflammatory statement, but I think there’s a good case to be made for it.

Hank Thompson, who knew Williams fairly well and heard many of his songs before they were recorded, told his biographer: “(Williams) was mainly a lyric writer and used a lot of standard tunes and old Jimmie Rodgers yodels as the basis for his melodies.  His lyrics were always tremendous … (Often) he would not yet have a melody for the lyrics.  But when I asked about this, he usually said, ‘Aw, I don’t worry about the melodies,’ which was the same as saying that Fred Rose covered for him on the melodies.” 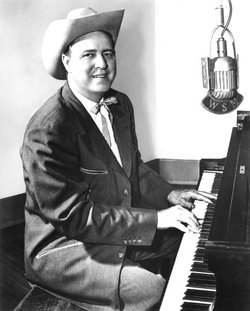 (He also said, “It was common knowledge in the industry that, despite the fact that Williams was listed as the writer of ‘Jambalaya’ (on the Bayou),’ he bought it from Moon Mullican, who really wrote it.  In fact, Moon told me so.”  As a piano player—not nearly so good as Mullican, who was country’s greatest piano player (call me “Sixteenth-Moon” Wren if you like)—I find that credible, because “Jambalaya” (1952) has a pianistic quality absent from nearly all of Williams’ songs, and is a natural fit with the piano.

Now, Thompson was a B.S. artist who loved a good story, and his memoir isn’t to be taken at face value.  Nonetheless, the essence of his take on Williams was supported by Roy Acuff, who as Rose’s partner was Williams’ publisher as well as his personal hero, and it rings true to me.  Anyone who’s ever listened to T. Texas Tyler’s “You’ll Still be in My Heart” (1945) has heard the tune to Williams’ “Cold Cold Heart” (1951) before, and several other Williams melodies—notably “I Saw the Light” (1948)—have obvious antecedents.  I’m prepared to believe that there are plenty of others for which I’m simply unfamiliar with the source. 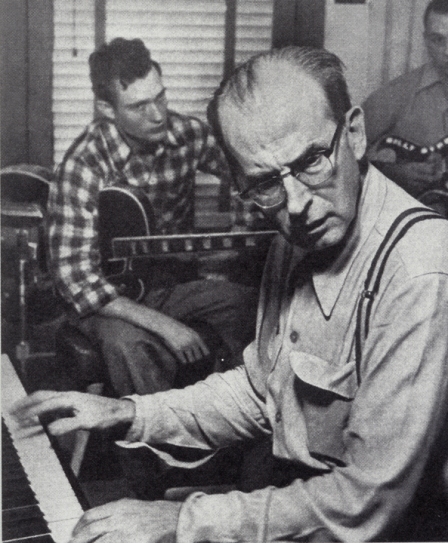 Fred Rose, songwriter, publisher and Hank Williams’ producer. He and Williams were, with Jimmie Rodgers, the first three men inducted into the Country Music Hall of Fame.

Fred Rose, a veteran professional song writer for Hollywood and Tin Pan Alley before he became Williams’ producer, was officially credited as co-writer on such Williams classics as “Mansion on the Hill” (1948), “I’ll Never Get Out of This World Alive” (1952) and “Kaw-Liga” (1952).  That he regularly tweaked Williams’ music is widely agreed upon by Williams’ musicians, and I’m ready to believe that many of Williams’ melodies that weren’t lifted from other sources were written by Rose, in whole or in part, without attribution.

Fans have resisted such assertions because they cherish the idea that Williams was, like Rodgers and the Carter Family, a paragon of artistic authenticity, an uncultured, untrained voice who reached within his soul for the songs that continue to touch us all so deeply.

In reality, of course, Rodgers and A.P. Carter weren’t really songwriters at all—at best they were editors or arrangers of folk songs, hymns and Victorian parlor ballads.  As for Williams, he was a professional songwriter who wrote his songs not because he was expressing his inner anguish but because it was what he did for a living.  He wasn’t above writing a song to cash in on a trend in popular music (his “Alabama Waltz” (1950), for example, is a lovely song, but it owes its existence to the phenomenal success of “Tennessee Waltz” (1947), by Redd Stewart and Pee Wee King) or singing a song that had nothing to do with his own life, such as Rose’s anti-Stalin novelty “No, No, Joe” (1950).

By the end of his short life, Williams was as much a professional as Rose was.  He monitored the Billboard charts and his own royalty checks assiduously (a story, perhaps apocryphal, says that when a friend told him about a pop version of a Williams song that he’d heard and said, “You’d hate it,” Williams replied, “Why, did the check bounce?”).  The recently released recordings of his “Mother’s Best” radio programs includes an off-the-cuff moment in which he and announcer Cousin Louie Buck talk admiringly about the work of Irving Berlin, with the easy respect of one master craftsman to another.

Williams is credited with authorship of 167 songs, and they’re not all great, or even good.  They’re not all drawn from his own life, and almost certainly they aren’t all even by him.  (If he actually wrote everything copyrighted under his name, he’s unique among country artists of his era.)

Williams was a masterful singer, not because he had a magnificent voice, but because he had a serviceable one which—when sober and when paying attention—he could get to do exactly what he wanted it to, which in the best of his recordings was to find the emotional heart of a song and convey that emotion with simple, wrenching purity.

It didn’t matter if the song was his own or someone else’s: Most people think Williams wrote “Lost Highway” (1949), for example, which was actually written and recorded the year before by Leon Payne—but Williams’ recording has a penetrating directness which Payne’s doesn’t have.  Williams finds more in it than its creator did.  (As in so many of his recordings, part of Williams’ secret is his willingness to sing much more slowly than other singers.)

If he was primarily a lyricist and not a composer, that’s no small claim.  If he never had the voice of a Johnny Cash or a Roy Orbison, well, it’s instructive to listen to the many Hank Williams covers recorded by Cash and by Orbison.  They’re a pleasure to listen to, as great voices always are, but they don’t quite get to the heart of the song.  Williams does.

To most of us who love country—and especially to those of us who love country without any sense of personal familiarity or nostalgia to lean on—that’s the essence of county.  Even the best country songs, by people like Kristofferson who know things about lyrical structure, about rhythmic artistry and, yes, about melody which Williams never even suspected, can’t compete with the work of a Berlin, a Simon or a Mozart.  They aren’t trying to, though.  Instead of the intricacies of a Sondheim or the grandeur of a Mahler, they’re targeting the human heart.

There may never have been someone who hit that mark more consistently than Hank Williams, as a lyricist and as a singer.  To me, anyway, that’s why, 95 years down the pike, Hank Williams still matters, and why he probably will 95 years from now.