“What is it you like so much about the sad songs?”

One of the things I enjoy the most about the country shows I’ve been doing for the past few years is the opportunity to talk to audience members afterward.  People come up to tell me that they’ve enjoyed the show, to take issue with me over something I said or sang (or, more often, didn’t say or didn’t sing), to tell me their own country-music stories and to ask questions.

After I did a show recently at the Emma S. Clark Memorial Library in Setauket, a woman came up and asked me, “What is it you like so much about the sad songs?”  She didn’t say so, but I got the feeling that she was saying, “Life is sad enough, why do you have to sing so many sad songs?”  I’d never been asked that particular question before, so I gave an off-the-cuff answer—“I love great country songs, and that includes a lot of sad songs.  It would give a wrong idea of country if I did only the cheery songs—though I do plenty of them, because I love them too.”

We moved on to other things in the conversation, but the question stayed with me and, a few weeks later, I’m ready to give it the answer it deserves.  I hope she reads this. 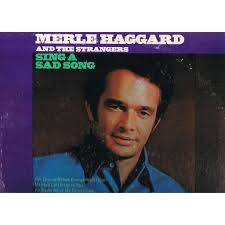 If it’s good enough for Merle …

One of the differences between country music and the rest of popular music is that it is, or at least historically was, written for grown-ups.  Pop, rock ‘n’ roll, rap, hip-hop and all the other genres that make up popular music have traditionally been aimed at the teenage market, but country—like blues, classical, opera and, at least in recent years, Broadway—is aimed at an older audience.

That most of popular music is aimed at a teenage audience means that, in those songs, the worst thing that ever happens is unrequited love.  (Yes, teenagers face a good many things far worse than that; except for a brief flowering of antiwar music in the late 1960s and early 1970s, though, popular music has shied away from such things as war, hunger, poverty, sexual violence, parental abandonment, AIDS and the like.  Popular music as a whole is an escapist form, and always has been.)

Country, written for grown-ups, has always acknowledged a world which had much more sadness in it.  Poverty, sickness, alcoholism, adultery, violence, death … they’ve all been staples of country music for as long as there’s been country music.  And while there are plenty of country songs that find something upbeat, even something funny in those subjects, it’s unavoidable that such themes will lead to a greater number of sad songs, and that the sadness will be of a deeper, more penetrating kind than in, say, Paul McCartney’s classic “Yesterday” (1965).  That’s a great song, but there’s a much harsher sadness in, say, Hank Williams’ “I’m So Lonesome I Could Cry” (1949).  They’re both great songs on the same theme, but McCartney’s is soft, gentle and wistful, where Williams’ has a starkness to its despair that McCartney never approaches.

(This dichotomy between country and pop is perfectly captured by two song titles: Wynn Stewart’s “Sing a Sad Song” (1965), recorded by Merle Haggard, and Elton John/Bernie Taubin’s “Sing Me No Sad Songs” (1968), recorded by John.)

So the right question probably is, “What is it country likes so much about the sad songs?”  I was asked about me, though, so let’s limit our discussion to me—except to say that I think that there’s nothing particularly special about me, and that what I’m about to say goes for a lot of other country singers and country fans as well.

I’m 57 years old, and I’ve been going to a lot of funerals lately.  I’ve buried both my parents and several elderly relatives in the past 10 years, and lately a lot of old friends as well.  This is because in my own teen years, when most of my peers were spending their out-of-school time with others in our age group, I was doing Gilbert & Sullivan with a bunch of people who were, most of them, 20, 30, even 40 years older than I was.  I’ve got a lot of friends in their 70s and 80s now, and that’s got all kinds of upsides—but it means that I go to a lot of funerals.  Eleven in this year alone, plus a handful more that I wanted to go to but couldn’t get away for.

I’m also watching my peers start to have health issues (and watching too many of them die far too young), and noticing that my own eyesight is a bit fuzzier than it used to be, that I can’t live without sleep the way I used to, that physical aches and pains come to me more often and take longer to go away.  Having lost a parent to Alzheimer’s, I can’t help wondering whether a memory lapse is just a momentary screw-up or the start of something dreadful.

Which is a long way of saying that I’m much more familiar with the sadness of life than I was 10 years ago, and so I relate more to music that acknowledges that sadness than I used to.

I’ve lived a charmed life, very little of which is due to my own efforts.  The great country artists—and most of the fans that loved them—had much harder lives.  I’ve never had to cope with real poverty, never felt the loss of a sibling or the loss of a home, never had to endure a divorce (my own, my parents’ or a sibling’s), rarely had to do anything that I think of as really demanding physical labor.  I’ve never gone to war and, until the past 10 years, had never seen anyone die.

But life brings sadness to us all, one way or another.  Warren Buffett, Jimmy Carter, Queen Elizabeth, Robert Redford, Stephen Sondheim … These are all people who are widely loved and admired, people who have succeeded in life beyond any expectation they may have had as children, but they’re old now, and I’m certain that they know what real sadness is.  We don’t any of us get that far without learning that most unwelcome of lessons.

If there’s going to be sadness in the world, then, how can we respond?

We can close our eyes, ears and minds, whistle past the graveyard and try to convince ourselves that there’s nothing to worry about; Donald Trump is significantly older than I am and, while I don’t know him, I suspect that this is his answer to that question.

We can sink into despair, letting ourselves be overwhelmed by a sadness which is certainly overwhelming enough to do the job; every year untold thousands of people commit suicide, as did Chester Bennington, Spalding Gray and Robin Williams, and many of them do so because life’s sadness has simply become too much for them.

We can laugh it off, turning our sadness into a joke, the way that Woody Allen, George Burns, Grandpa Jones, Tom Lehrer and hundreds of other comedians have done.

Or we can do what so many great country artists have done:  We can take that sadness, see it for what it is and, without losing sight of what it is, find in it a strange, wonderful kind of beauty.  When I listen to the Carter Family’s “Can the Circle be Unbroken?” (1935), to “I’m So Lonesome I Could Cry,” to Kris Kristofferson’s “Me and Bobby McGee” (1969), I don’t forget the sadness, but I find something in it that expresses a universal truth: Sadness and beauty go together, the same way that joy and beauty go together.  Funerals aren’t beautiful in the same way that weddings are, but they can be beautiful all the same.

And that’s what I like so much about the sad songs.

Country singers, blues singers, jazz singers, folk singers … they’ve always felt that way, always been able to see the beauty in the sadness, and the sadness in the beauty.

They aren’t the only ones, of course.  A man I’m proud to consider a friend to some small degree may have captured it perfectly a half-century ago:

One thought on “Sing Me a Sad Song”